Register as an Employer

By registering as an employer on EURES, you will be able to search for CVs matching your requirements and view, save, and organise candidates to make recruitment easier.

Register as a Jobseeker

By creating a EURES jobseeker account, you will be able to upload your CV and make it available for search by employers across Europe and much more.

EURES Malta: Reaching out to employers 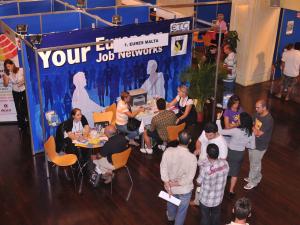 The EURES Malta team have developed new means of assisting employers, particularly in hospitality, Malta's most productive sector. Of the 144,094 full-time workers on the island (as of October 2009), some 40,000 of these depend, directly or indirectly, on work in the hospitality sector. Still, the popularity of the island means that during seasonal peaks the industry is very often in short supply of workers.

Malta has much to offer European jobseekers – a fantastic working environment in the Mediterranean climate of course being a major draw. There are approximately 400,000 inhabitants on the island, of which over 4,000 are non-Maltese European citizens. For this reason, employers on the island are turning their attention to arriving jobseekers.

All positions are of course advertised on the EURES Job Mobility portal, but ETC, the Maltese Public Employment Service, and EURES Malta have also set up an automatic daily email update to send out vacancy information to 7,000 subscribers across Europe. EURES Malta also takes some of the burden from employers by receiving applicants' CVs and carrying out the pre-selection. Many jobseekers have been placed in positions in 5* hotels and popular bars.

George Schembi from the Malta Hotels and Restaurant Association (MHRA) explained how networks such as theirs extend EURES outreach by passing information and opportunities to their members and encouraging them to use the services. 'I'd say that EURES are certainly well known on the island! I believe many of our members have found the collaboration very successful'.

The EURES team have also provided Maltese companies with the chance to attend European Job Days throughout Europe by sending invitations and information to members of the MHRA . For example, in April, plans were underway for a representative of the Santana Hotel, of St Paul's Bay in the north-east of Malta, to attend a European Job Day in the Czech Republic as a strategy to reach out more directly to European jobseekers.

EURES Malta is also creating opportunities for Maltese workers by bringing European employers to Job Days on the island. An event on 14th and 15th of May aims to bring employers from a variety of sectors to the island. Companies are being offered a stand free of charge at the venue, advertising in local media, and free catered accommodation – as well as access to highly qualified Maltese candidates!

In addition to events and the pre-screening of candidates, EURES Malta also works to cater to employers looking to take on a large number of employees. When Swiss aircraft maintenance company SR Technics set up a Maltese unit needing 350 workers, they coordinated with ETC and EURES Malta to promote the opportunities, carry out the pre-selection and, in this instance, carry out interviews and select candidates.

'This is the kind of service that we really enjoy offering employers and we anticipate extending such activities further. It seems to have been a very positive experience for the companies that have worked with us', states Maltese EURES Manager Raphael Scerri.

So it seems that there is a lot to be gained from cooperating with EURES; the EURES team in Malta are busy reaching out to as many employers as possible.